Tangles of strands - a conjecture

Pedagogical. For physicists, the best introduction to the strand tangle model is the latest preprint. It shows how wave functions, quantum theory, fermions and bosons, the three gauge interactions, the elementary particle generations and elementary particle masses follow from strands.

Wave functions and interactions. A single principle is used to derive the Schrödinger equation, the Pauli equation and the Dirac equation. Spin 1/2, fermion behaviour, mass and, above all, the observed elementary particles and the observed gauge interactions are deduced - without any modification.

Complete. The strand tangle model explains why all measurements are electromagnetic, why only massive particles can have electric charge, why the spin-statistics theorem holds, and why the origin of gauge interactions settles the Yang-Mills millennium problem. (The latter topic is also explained here.) In short, it is shown that all "laws" of physics are uniquely defined, without any possible variation or alternative. There is only one possible universe.

From 9 lines to 1 line. In 2022, the strand tangle model, with its one line, explains about 8.2 lines of the 9 lines that describe all of physics and of nature. The strand tangle model also agrees with all experiments. The remaining constants of line 9 still have to be deduced. The task in not finished. But: no other theory in the literature has achieved this much. (There are two approaches with similar results. The octonion model by Singh (https://arxiv.org/pdf/2206.06911.pdf) explains more than 8 lines, but appears to predict various unobserved particles. Connes' non-commutative geometry (https://arxiv.org/pdf/1004.0464.pdf) also explains about 8 lines in total, but it is not fully clear on lines 6 and 7, predicts the unobserved see-saw mechanism in line 8 and possibly additional unobserved particles, and appears to predict the unobserved unification of coupings in line 9. See here.)

The strand conjecture about the complete description of nature

Beautiful. When we look at the starry sky, we admire the vast space, the coloured twinkling stars, and the deep blackness. The strand conjecture proposes an explanation for their origin, their properties and their motion. The foundations of what we find around us – particles, space, horizons and colours of everything we see – are explained.

C. Schiller, A conjecture on deducing general relativity and the standard model with its fundamental constants from rational tangles of strands, Physics of Particles and Nuclei 50 (2019) 259–299. Download the published paper at dx.doi.org/10.1134/S1063779619030055. Read the published paper online for free at rdcu.be/cdCK7.

Testable. The paper argues that all of modern physics arises, directly and inevitably, from the Planck scale. Below, the more pedagogical papers and preprints deduce additional experimental predictions and tests. A detailed list of tests is also found on the bet page, by clicking here.

The standard model of particle physics deduced from strands

Simple. The strand conjecture starts with deducing Dirac’s equation from Dirac’s trick for tangles. Then, tangle classification yields the particle spectrum. Tangle deformations yield, via the Reidemeister moves, the particle gauge interactions groups U(1), SU(3) and broken SU(2). Working out the details gives usual particle physics, with no additions, no modifications and no omissions.

Elegant. It is regularly claimed that the standard model is complex, incomplete or even ugly. The strand conjecture argues the exact opposite: all of particle physics is due to tangled strands fluctuating at the Planck scale. A single fundamental process appears to explain the principle of least action, the Dirac equation, the observed interaction spectrum, the observed gauge symmetry groups, the observed elementary particle spectrum, and the fundamental constants (masses, mixing angles, and coupling constants) describing them. The Lagrangian of the standard model arises, without modifications. Over 100 additional tests and predictions about particle physics beyond the standard model are deduced. They agree with all experiments. So far, no other approach in the research literature appears to make (almost) any of these predictions. Indeed, it appears that the explanation of the standard model using tangled strands is consistent, correct, hard to vary, and complete.

C. Schiller, Testing a conjecture on the origin of space, gravity and mass, Indian Journal of Physics 96 (2022) 3047–3064. Read the published paper online for free at rdcu.be/czpom.

50 700 solar masses per second. Strands provide a microscopic model for space and horizons. This allows to derive the field equations of general relativity and a model for quantum gravity. Numerous tests of the strand conjecture in the domain of gravitation and quantum gravity are deduced, starting from a single principle. All tests agree with observations so far.

For example, strands confirm that gravitation – like nature itself – has a power or luminosity limit c5/4G, a momentum flow or force limit c4/4G, a mass flow limit c3/4G, and a mass to length limit c2/4G. The limits are given by one quarter Planck mass per Planck time, or 50 756 solar masses per second (times c-1, times c, or times c2). No observation ever exceeded these limits.

Many predictions about gravitons and quantum gravity are deduced, including a direct derivation of black hole entropy from strands. Above all, strands also explain the gravitational masses of elementary particles and provide upper and lower limits for the mass values. All predictions agree with data.

Strands seem to be the simplest quantum gravity proposal in the literature. Strands agree with and predict all observations: strands provide a microscopic model of space, black hole horizons and gravitons, explain mass, particles and black hole radiation, imply general relativity without modifications, prevent singularities and wormholes, reproduce cosmology, but predict the lack of elementary dark matter particles. Strands are also complete: no question of quantum gravity is unanswered.

A specific discussion of black hole quantum gravity – to be published as a book chapter in early 2023 – is
C. Schiller, Testing a microscopic model for black holes deduced from maximum force.

Any complete description of nature has to be strange. To satisfy this requirement for gravitation, the following animation, made by Jason Hise, shows how black hole rotation is modelled in the strand conjecture. (The flattening of the horizon at the poles is not shown.) With a bit of imagination you can determine the location of the ergosphere.

Colours and beauty. The strand conjecture shows how the tangle model leads to quantum electrodynamics, including electricity, magnetism and optics. Over 40 tests for the conjecture are given. So far, they are all positive. In particular, the strand conjecture appears to allow approaching two old challenges: how to calculate the fine structure constant and how to calculate the lepton masses – both from first principles. The preprint uses the tangle model of particles to deduce estimates. The fine structure constant 1/137.036(1) and the lepton masses, in particular the electron mass, are the ingredients that determine all colours, tastes, smells, sounds and most shapes around us. In other words: it is argued that tangles of strands generate all beauty in nature.

The spin of leptons. Tangles of strands reproduce spin. Leptons consist of three strands. The animation by Jason Hise gives an impression:

C. Schiller, Testing a conjecture on quantum chromodynamics (to appear).

Quarks and nuclei. The strand conjecture shows how the tangle model leads to the strong interaction, the quark model, gluon flux tubes, confinement and asymptotic freedom. The existence (new in 2022) of glueballs is predicted. Many other tests for the tangle model are deduced, including the lack of new generations, the lack of CP violation and the lack of deviations from QCD. All consequences agree with data. In particular, the strand conjecture allows estimating the strong coupling constant and the quark masses ab initio.

The spinning motion of the simplest tangle of the down quark. Jason Hise also produced the animation for this case:

Indeed, the tangle model is peculiar – to say the least.

The universe. This and a subsequent preprint on cosmology complete the topic of gravitation. In the strand conjecture, the universe consists of a single closed strand that forms the cosmological horizon and also the particles and the space inside it. Over time, this strand gets more and more tangled. (As one reader said: the universe plays cat's cradle.) This description reproduces usual cosmology and leads to numerous tests and predictions: the universe expands; nothing – no matter, no radiation and no space – exists beyond the cosmological horizon; inflation did not occur; there are no cosmic strings and no higher dimensions; there is no non-trivial topology; there is no bouncing universe; there is just one universe; the luminosity of the universe is always limited by c5/4G; dark matter made of unknown elementary particles does not exist; if dark matter exists at all, it is made of known matter or black holes or both; dark energy, or vacuum energy, does exist and is a natural consequence of strands; the density of vacuum energy, the cosmological constant, is small; baryogenesis appears to be due to non-perturbative effects.

The strand description of cosmology is promising. However, calculating the vacuum energy density remains a challenge. Therefore, clarifying the relation to modified gravity and to the baryonic Tully-Fisher relation is a challenge as well.

Technicalities. The strand conjecture reproduces the Lagrangians of the standard model and general relativity, explains the number of generations and the particle spectrum, deduces all Feynman diagrams and propagators, explains the gauge groups U(1), SU(2) and SU(3), explains the fundamental constants ab initio, solves the hierarchy problem, explains neutrino masses without a see-saw mechanism, solves the strong CP problem, predicts the validity of the standard model and of general relativity up to the Planck scale without any intermediate energy scale, implies that the weak interaction violates parity maximally, explains the equality of proton and positron charge, has no problems with anomalies, predicts no issues with baryogenesis, has no grand unification, has no supersymmetry, has no additional spatial dimensions, has no inflation, no inflaton and no dilaton, solves a number of black hole and singularity issues, implies gravitational waves, has no dark matter particles, has a naturally small cosmological constant, solves various problems about gauge theories, answers Hilbert's sixth problem, and explains the principle of least action. 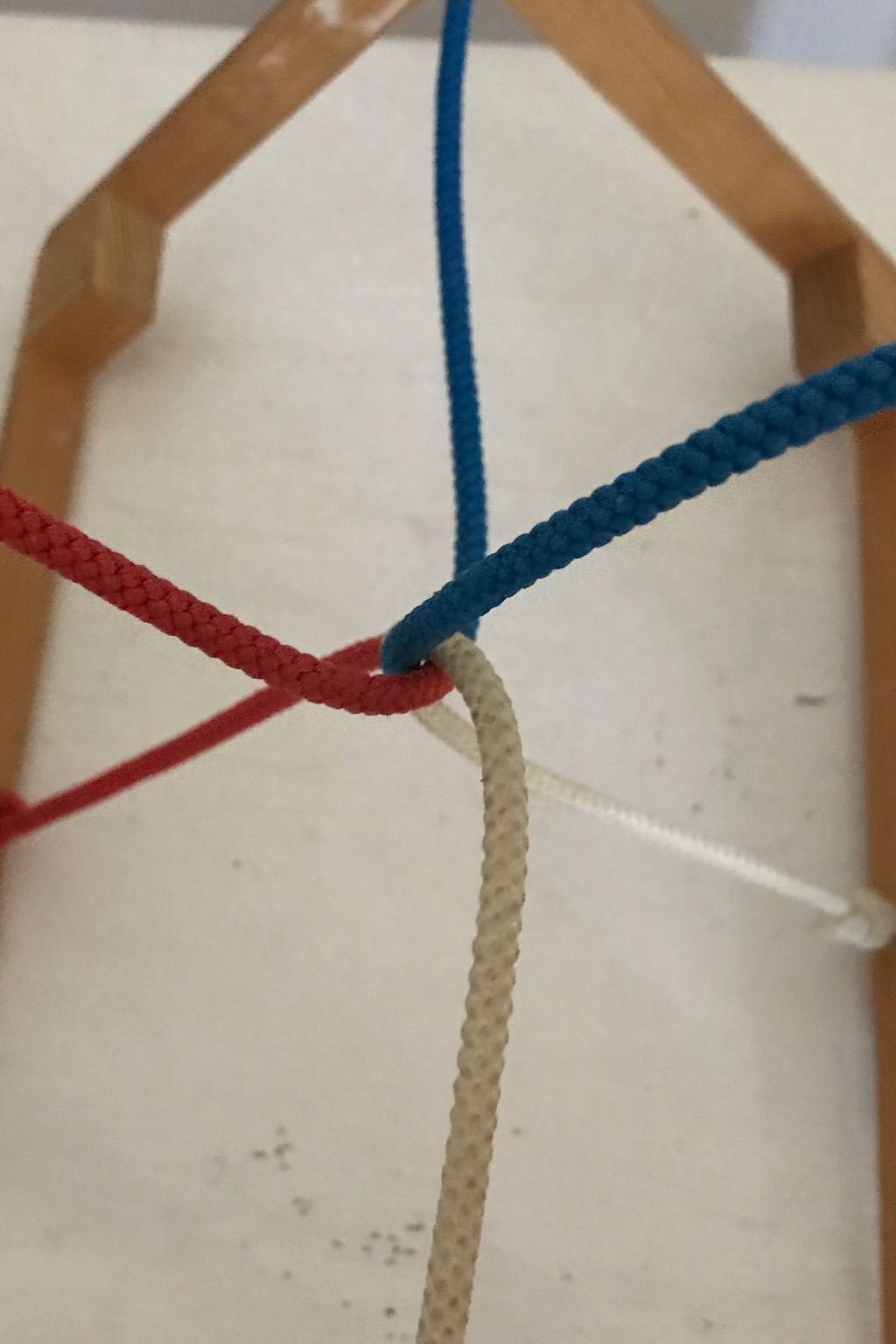 Note the similarity of the electron neutrino tangle with three loose strands. This is one reason for its low mass value.

Images of the conjectured tangles for the electron, the muon and the tau:

These tangles, together with the quark tangles and the elementary boson tangles, appear to reproduce all Feynman diagrams of the standard model. (Can you help producing 3d pictures that can be rotated by a html viewer?)

Blog. The blog on research about fundamental physics and tangles of strands tells more about general ideas, past mistakes, objections, encountered difficulties, and progress.

T-shirt. An important motivation has always been the support for the ailing physics T-shirt industry. Since decades, it has been desperate for new designs.

History. The strand conjecture is a side result of the free Motion Mountain physics book series, in particular of Dirac's spin 1/2 demonstration, of the principle of maximum force, and of the strand explanation of back hole entropy. Strands reduce the 9 lines describing textbook physics to a single principle (that fits on a T-shirt), and make clear predictions for experiments and calculations. If you want to bet about the outcomes (click here for an evaluation of your chances), to comment, or if you want to help with animations similar to these, write to christoph@motionmountain.net.

History. A more extensive, more passionate, but also older and less precise presentation is the original text on the strand model. It was written as a research volume that continues the adventure of the five textbook volumes.

Free book:   The Strand Model – A Speculation On Unification
The quest for a complete, unified theory leads to a proposal with testable predictions, to ab-initio estimates of the W/Z and Higgs/Z boson mass ratios, and to a new ab-initio approximation for the fine structure constant and the other fundamental constants. 500 pages, 40 MB.