The theories of physics in one graph


The Bronshtein limit cube of physics

The main theories of physics can be distinguished by the combination of the speed of light c, the quantum of action ℏ and the gravitational constant G that they contain as a limit. Each limit value defines the respective theory. (Note that the limits are not unique; for example, both c and c2 are defining limits of special relativity.)

Physics starts at the bottom, where no limits are assumed, and proceeds towards the top, increasing precision at every corner. The topmost corner, the theory of relativistic quantum gravity, limits all observables. It provides the complete description of motion; and the description provides complete precision.

Several of the limits found in the cube are not well known. About the maximum force c4/4G, see the page and papers dedicated to the topic. About the "limit" 4G that distinguishes unbound and bound motion, see the preprint C. Schiller, The quadruple gravitational constant, the Bronshtein cube of limits, and implications.

The physics cube is often called the Bronshtein cube (that is how he wrote his name himself) or also the Bronstein cube. Bronshtein was a brilliant physicist, born 1906 in Vinnitsya in Ukraine. He developed the concept of the physics cube as a young man and published it in 1933 and 1934. He was killed by Stalin's henchmen at the age of 31. He was rehabilitated in the 1950s.

In short, the Bronshtein cube with limits illustrates how the fields of physics are defined. It also shows that physics laws are simple.

Describing nature with limits implies that there are no infinite quantities in nature, neither infinitely large nor infinitely small.

The speed limit, its simplicity and its confirmation by experiment imply the prediction that there is no physics beyond special relativity.

The action limit, its simplicity and its confirmation by experiment imply the prediction that there is no physics beyond quantum theory.

The force limit, its simplicity and its confirmation by experiment imply the prediction that there is no physics beyond general relativity – thus no higher-order terms in the Lagrangian. Maximum force also suggests that the hoop conjecture is valid; both concepts are closely tied to horizons.

Combining the limits implies that the double Planck length is the shortest measurable length in nature. And this even though space is conetinuous at the same time.

Together, all the limits also imply, as explained on a separate page, that all of physics can be summarized in 9 lines.

Again, the limits are not unique; other choices are also possible, using other powers of c, 4G and ℏ. For example, there is a maximum power c5/4G or a maximum mass flow rate c3/4G in general relativity, and a minimum length, a minimum area, a minimum volume, a maximum acceleration, or a maximum mass density in relativistic quantum gravity, the uppermost theory in the Bronshtein cube.

The Bronshtein cube is three-dimensional. Explaining the origin of the number of dimensions of the physics cube is not straightforward.

(The consequences and a way out of these restrictions are told in the research paper "From maximum force to physics in 9 lines and towards relativistic quantum gravity" at https://www.researchgate.net/publication/365750175.)

Summary: What the Bronshtein limit cube shows and what it doesn't

1. The Bronshtein limit cube shows that physics is simple. Each theory is defined by a simple limit.

2. The Bronshtein limit cube shows that the unified description of motion is near. The defining limits of the unified description are known: they contain c, ℏ and 4G. In other words, fundamental physics is known in all its experimental and theoretical consequences – namely relativity, gravity and quantum physics. In other terms, fundamental physics is close to its completion.

In 2022, a new website dedicated to the topic has appeared: https://cube-of-physics.org/.

A longer writeup of this page is C. Schiller, The quadruple gravitational constant, the Bronshtein cube of limits, and implications. Download the preprint here.

The history of the cube is cloudy. It also depends on the point of view taken, in particular on whether is it seen as a cube of theories, as a cube of fundamental constants, or, as is done here, as a cube of limits.

This reference is the origin of the cube, but is hard to find: M. Bronshtein, K voprosu o vozmozhnoy teorii mira kak tselogo [On a possible theory of the world as a whole], in Osnovnye problemy kosmicheskoy fiziki [Basic problems of cosmic physics], Kiev, ONTI (1934) 186-218 (in Russian).

The papers by Okun and by Oriti on the same topic are cited in the preprint.

Appendix: Another version of the Bronshtein cube

The physics cube also structures the adventure presented in the volumes of the free Motion Mountain Physics Textbook. This version has more details and mentions the adventures encountered in the different theories: 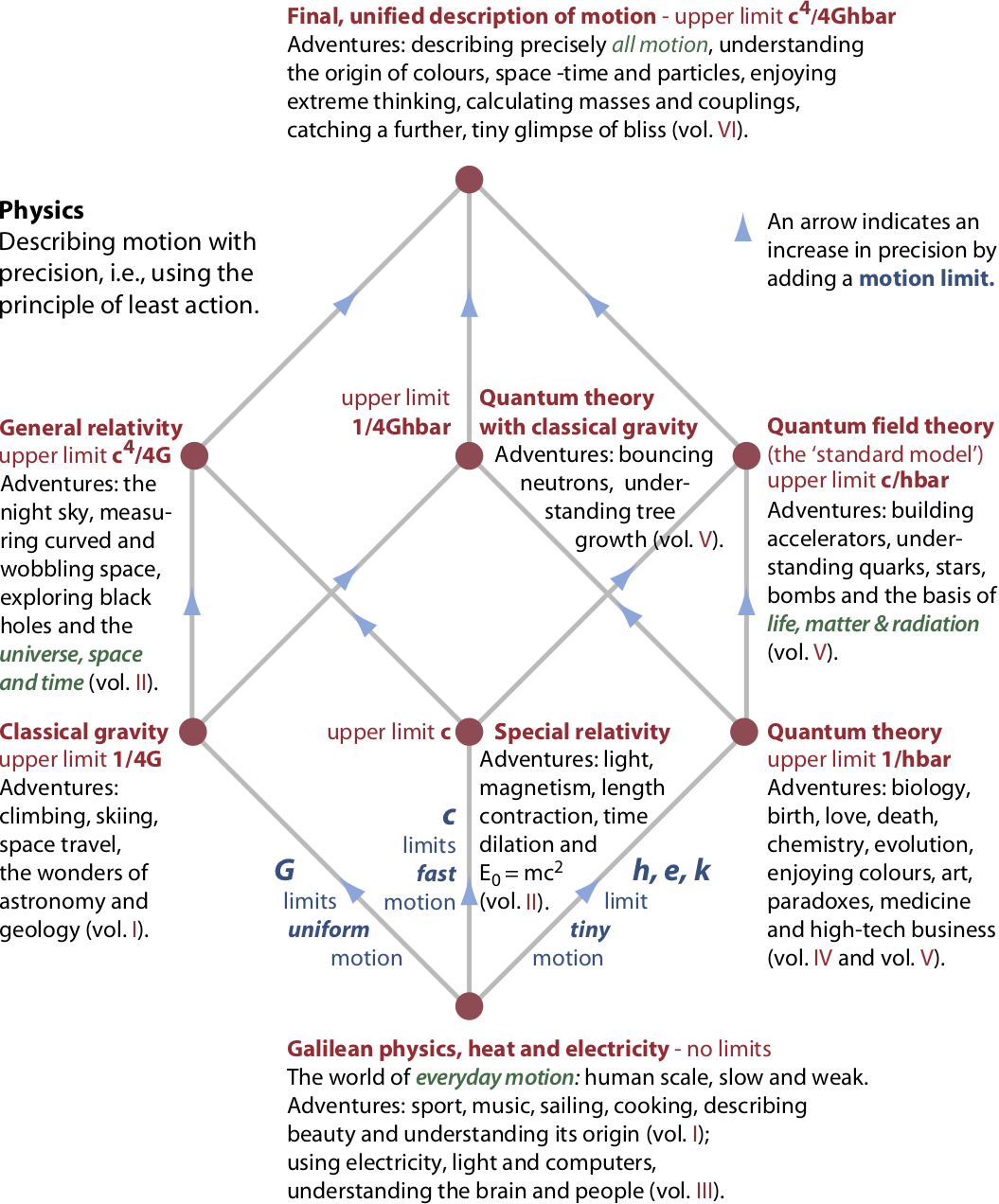